I ran across this carved rock from Meredith, NH, some years ago. It has continued to fascinate me with its uniqueness. Is it genuine? Perhaps. Maybe. Yes? The imagery is certainly Native American but the method of execution on an egg shaped rock is more linked to Mexican stone artifacts than any North American image I’m aware of.

Must it always contain writing? Well, no. Certainly, the pre-writing imagery of many cultures is considered to fall within the realm of graphic design. For example, the fabulous bulls and other animals of Lascaux Cave had meaning for their creators and viewers and we only can attempt to understand the intended meaning.

Despite the thousands of years, some very ancient artifacts survive: mostly of stone, bone, and shell, they are indicative – we think – of what was essential to the ancients: food gathering or hunting, safety, shelter, ritual, and ornament. The latter, ornament, may have been more bound to ritual, hunt, and safety than just decoration.

There were early attempts to understand and document earthly cycles, as this calendar bone indicates. It is Aurignacian (about 32,000 BC) and has been analyzed as representing the phases of the moon http://sservi.nasa.gov/articles/oldest-lunar-calendars/ – certainly important to a society dependent upon hunting.  The layout is serpentine but whether that reference is to a circular, repeating pattern like moon phases, a snake, or a stream is unknown.

Writing of some cultures is not yet deciphered. Harappa with its Indus Script, I believe, is one such culture with writing that was meaningful once but now not. We presume/assume that the writing accompanying the image of the bull relates to it but we do not know how. Was it an inventory or an invocation? Are there 3 bulls, 2 humans (one with a weapon) and a tool? All we can assume is that something of importance required recording.

Were it not for the Rosetta Stone, the ancient Egyptian hieroglyphic language might still be undeciphered. The historical power of the image is evident when one visits the British Museum; it is difficult to get a good view of the stone and near impossible to photograph, though I did manage an image 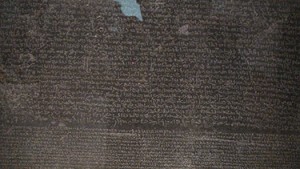 of the demotic and Greek on the stone.

For sheer ancient drama, the hieroglyphics of tombs and monuments are commanding as are those on surviving wood pieces (the weighing of a heart or a soul by Thoth) and papyrus scrolls (like this fragment).

More recent and closer geographically to us is the Quipu system of knots which was used to keep records in the Inca empire. Little is known about the system because of obliteration by conquerors. The types of knots, lengths of fiber, and perhaps the color of the fiber used, are important to understanding the record. This Quipu, from the Inca empire is in the Larco Museum Collection. More information on Quipu [Khipu] can be found at http://khipukamayuq.fas.harvard.edu/WhatIsAKhipu.html 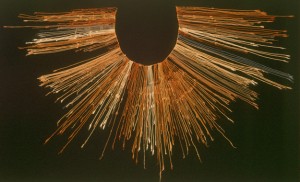 Early Asian instances of writing are late and disappointing, as they are limited to the oracle bones of the mid-Shang dynasty. Considering the technical abilities in the use of bronze by the Shang metalsmiths, it is hard for this writer to believe that writing developed so late in Asia, particularly China. 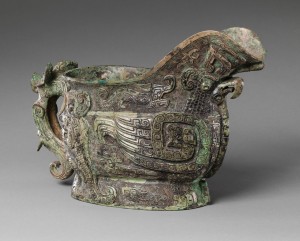 Possible explanations include lack of archaeological study of early pre-dynastic China or the use of easily destroyed media such as fabric or paper. There is a claim that a script earlier than that of the oracle bones has been found in Zhejiang Province, but there is a debate as to whether it is a legitimate writing system. Why? Per Wang Jangjun, “To become a language, certain symbols should be readable, shapeable and explainable” and these seem not to be.” Interestingly, I believe this definition makes Quipu a valid writing system.

Am taking a History of Graphic Design class and will be using my blog for my field notes.